I'm finally mostly rested after an exhausting 9 days in Kentucky covering the Rolex Kentucky 3-Day Event, the Kentucky Derby and Oaks and working on a photo story about Churchill Downs' first Spanish speaking chaplain. First I have to give a humongous thank you to Scott Serio of Eclipse Sportswire for being so accommodating to me and giving me such amazing opportunities, that's right, more than one. My trip to Kentucky had months of preparation and research on both my end and Scott's and it really paid off.

[scroll down if you just want to look at pictures]

I had to wake up no later than 6am central time (the majority was 4am) for 11 days and I crashed really hard the night of the Derby. I was literally falling asleep while working on my previous post, I was probably asleep within a minute after finishing it. I ended up sleeping for 11 hours straight the first night I got home which was wonderful. As odd as it may sound, sleep deprivation might be good for me. I've made some great pictures the past two times I've had several days with little sleep.

I haven't really explained much of what I was shooting throughout the week so I'll explain it a bit.

I arrived in Kentucky on Friday April 25th. That night we went to a farm that had an event to promote to use of thoroughbred horses that are out of racing age (older than 3) for other equestrian events. I spent over an hour just walking through the barn and trying to bond with the horses that were there to find a connection with them. It was really important for me to understand how people and horses had a relationship.

On Saturday and Sunday we were at the Rolex Kentucky 3-Day Event. The horses and riders had to navigate a cross country course with various jumps and obstacles and complete the stadium jumping course (along with dressage that we didn't go to). The shot below of a rider crashing in the water was during the cross country event. On Saturday night we headed over to Churchill Downs to attend opening night and the revealing of the world's largest 4K screen, at 171' by 90'. I actually think it could be bigger.

Every morning from Sunday through Thursday we woke up at 5am eastern (which felt like 4am to me) to get to Churchill Downs in time for the morning workouts for the Kentucky Derby and Oaks horses. Throughout those days, we had access to the backside of the track where all the horses and workers live. The only restriction was that we couldn't walk up to the stalls that the horses were kept in. We were able to be up close when the horses were bathed after their workouts too, which was sometimes fun. Tuesday morning had the heaviest rain I have ever seen and that was pretty cool. I love shooting in bad weather for some reason.

Monday afternoon was the first time I met Chris Wong, the subject of my photo story. I spent a total of 24 hours with him from Monday through Thursday evening. You can get more in depth on that work here, http://www.americasbestracing.net/en/the-latest/news-stories/2014/5/6/wong-helping-to-extend-chaplaincy-outreach/http://www.americasbestracing.net/en/the-latest/news-stories/2014/5/6/wong-helping-to-extend-chaplaincy-outreach/

On Friday May 2nd, it was Kentucky Oaks day. It was also the day where everyone set up their remotes and marked their shooting positions for the next 36 hours. This was essentially a practice day for the Derby. At about 11am I headed up to the roof to set up two remotes and mark my shooting position. I set up a 1D Mark III (thank you Brent Lewis for supplying that) and a 70-200 at ~130mm aimed at the finish and a Nikon D3 with a 45mm tilt-shift lens aimed on the home stretch. Both were not as successful photos as my handheld 1Dx and 200-400, but they helped give different viewpoints.

On Saturday, Derby Day, with the advice from Scott Serio and Alex Evers (also working for Eclipse Sportswire), I played around with the tilt-shift lens up on the roof to find other cool things to shoot. I took a picture from every possible angle I could get myself to and eventually found myself looking at the paddock.

So for the actual Kentucky Derby I had my two remotes set up, each on a different letter channel (25, C & D) on the pocket wizard and my handheld. I had C for the tilt-shift which was to my left, and D for the finish which was on my right. Both of the remotes were on cameras where the buffer would fill up pretty quickly since I was shooting in raw. This also meant I had to have perfect timing on them. Because of that, I triggered the wizard manually from my left hand while I was shooting with the 200-400 and had to add on channel for the finish line camera.

To add another twist, I had to be ready for three different exposures during the race that I needed to change to instantly because there were three different lighting conditions (sun, shade and a pan in the shade). Luckily I know my camera very well and know a way to do that. Before the race started I set up the three different exposures in manual mode, custom mode 1 and custom mode 2. I also have the M-FN button (next to the shutter) programmed to switch between your selected mode (manual at the time) and custom shooting modes. This worked very well for me and I didn't even have to think about it, I just glanced at the meter to make sure it was an acceptable exposure just to be safe.

I handheld my 200-400 the entire race and only put it down to rest for a little bit every few minutes or so during the post-race activities. Since I had so many technical tasks to worry about, I hardly remember much about the race itself. I took only 290 frames from my handheld during the 2 minutes and 3 seconds race. I followed the horses through the entire race since I was on the roof and could see everything.

I know it's sometimes fun to hear some more technical/hands-on explanation of things, so I'm going to try something new and explain what I was doing during the Kentucky Derby and see how it goes, I'll even include some contact sheets for reference. I'll start from when the horses started walking to the paddock since that is where everything began. 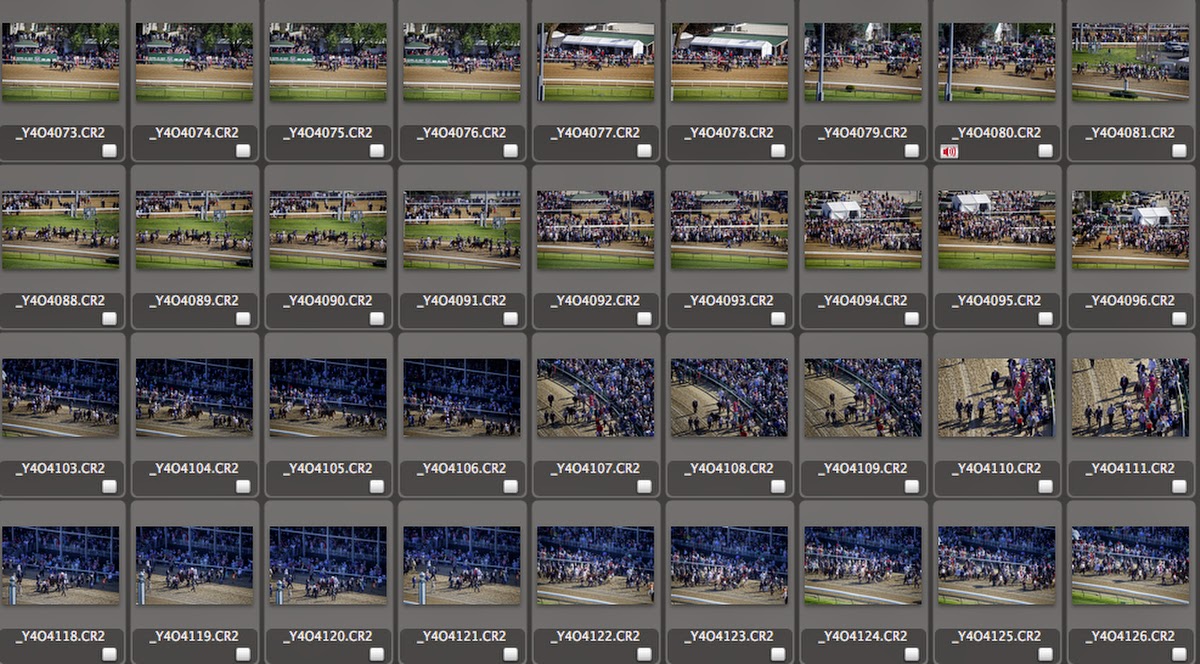 - Once the horses got to the paddock, I ran down one level of stairs to another part of the roof with a better view of the paddock to shoot with the tilt-shift 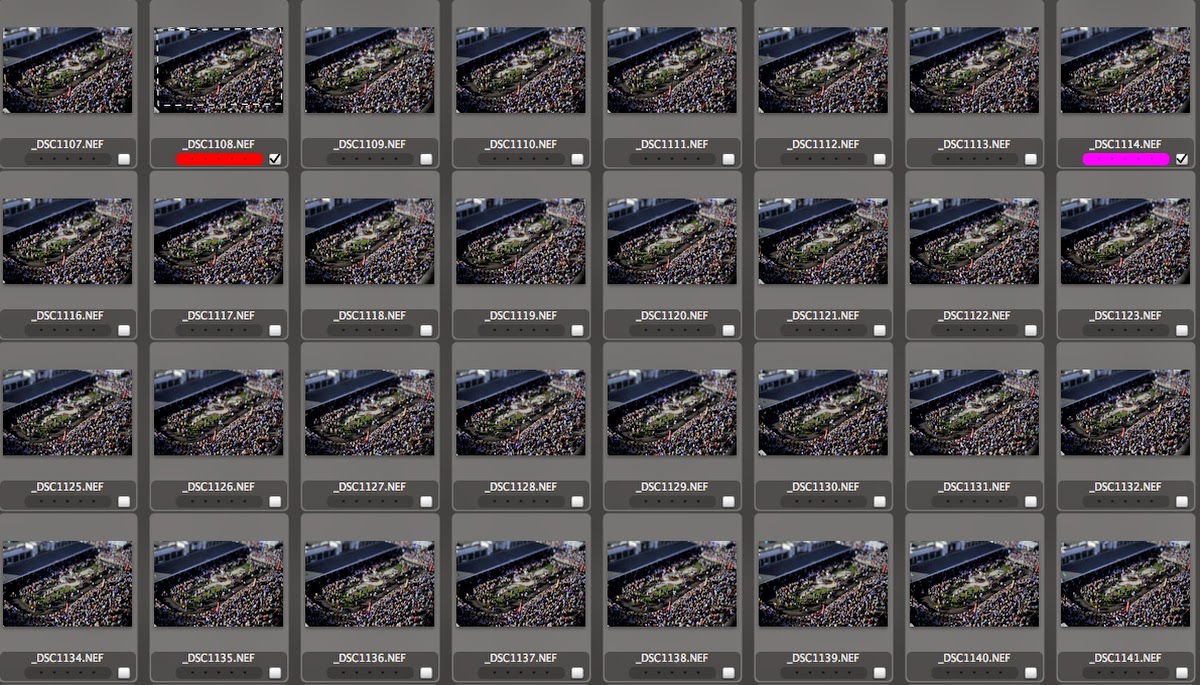 
- While I anxiously waited for the race to start, I set up the three different exposures for sun, shade and panning in the shade & set the pocket wizard to 25 C
- When the Derby began, I took 2-4 pictures every second while they passed for the first time while triggering the tilt-shift remote 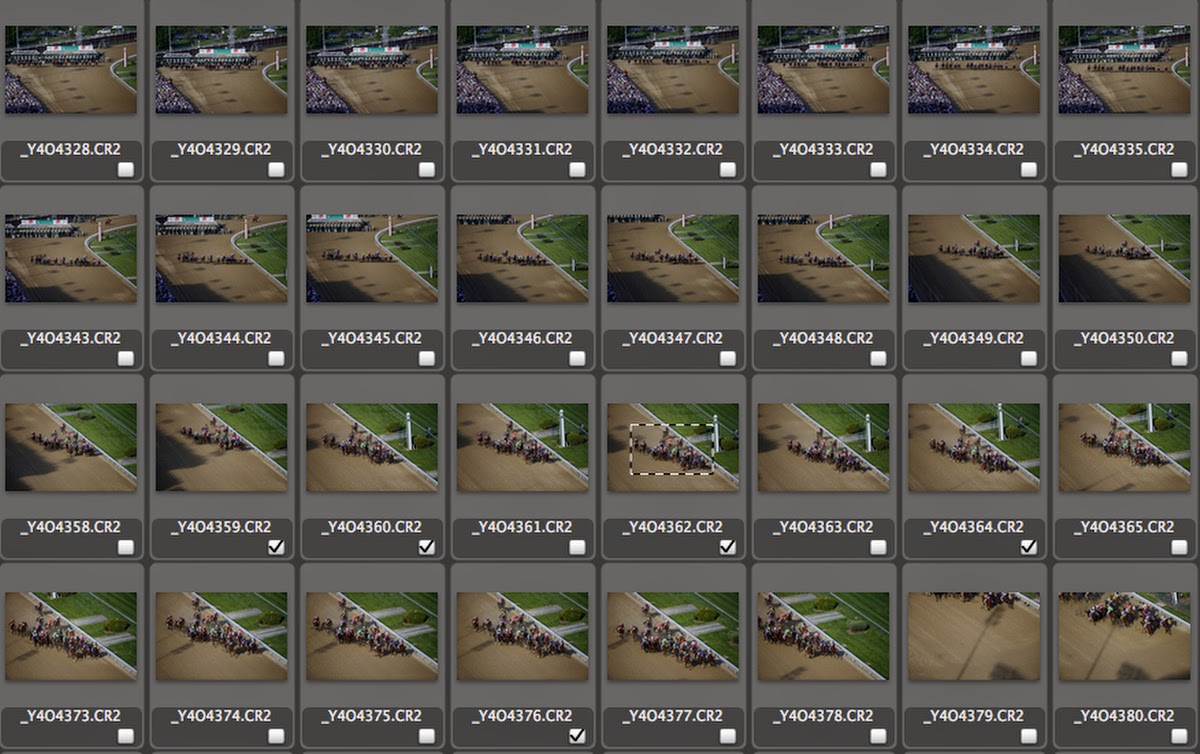 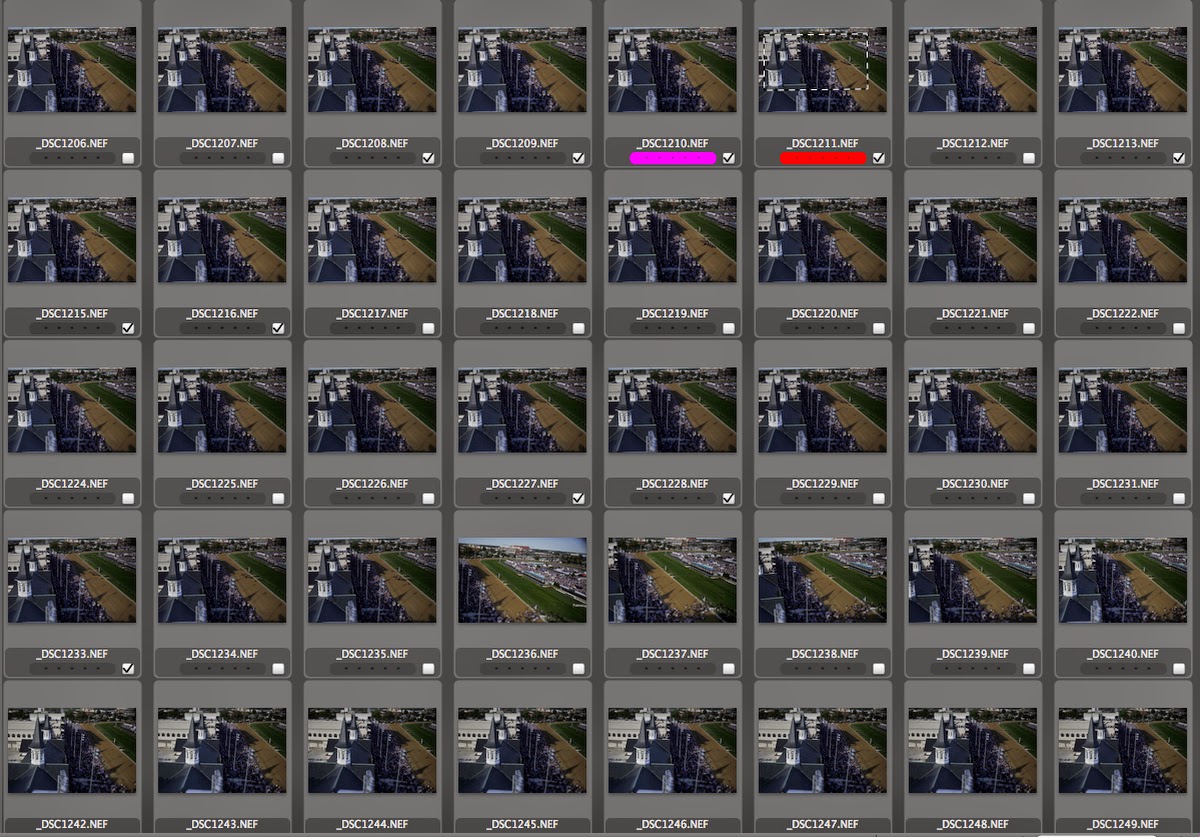 - Once they got in panning range, I switched to custom mode 1 and started shooting until they passed me 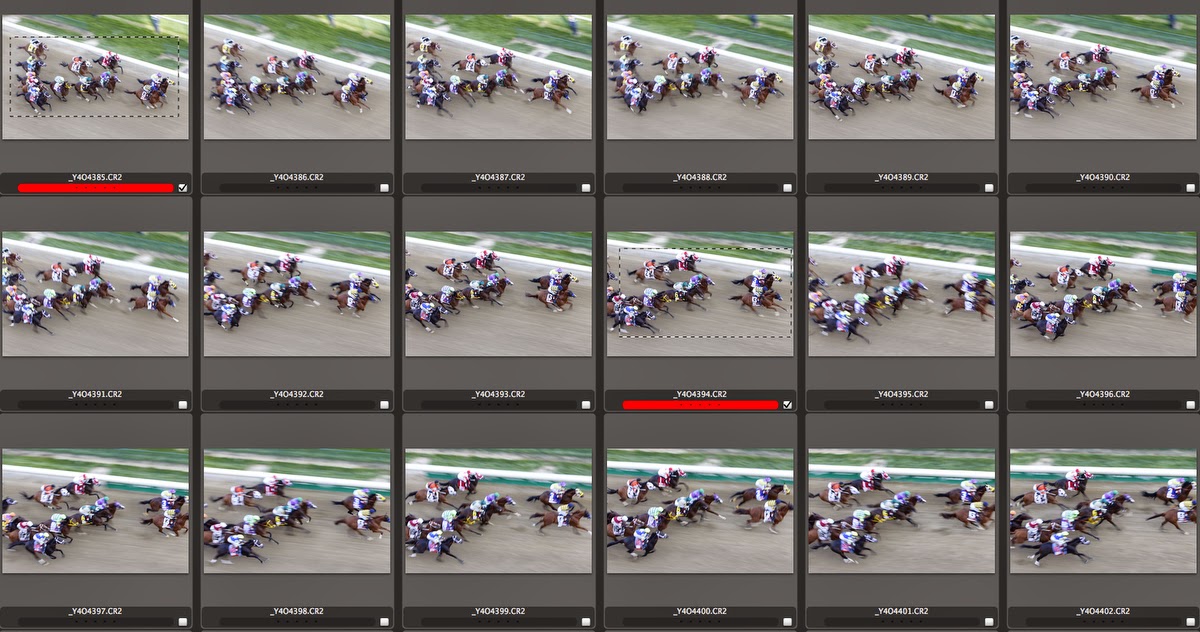 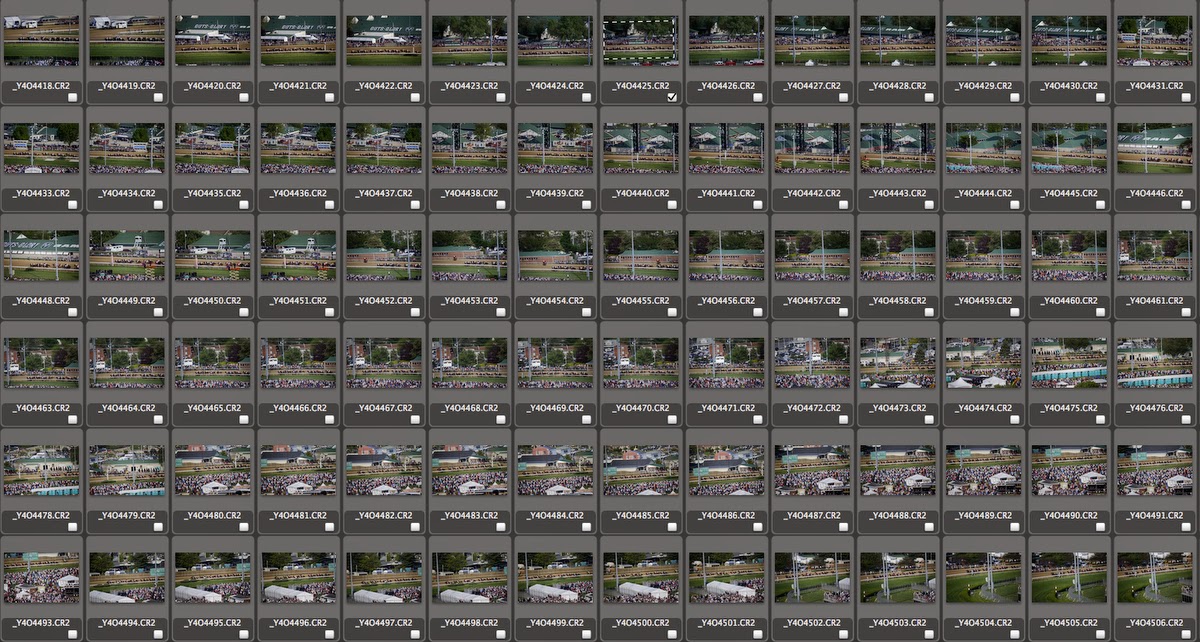 - I flipped out the 1.4x TC for the home stretch
- Triggered the tilt-shift when they passed the 1/8th pole
- I noticed California Chrome was starting to take the lead and got a few shots of him leading with the rest of the field in the frame 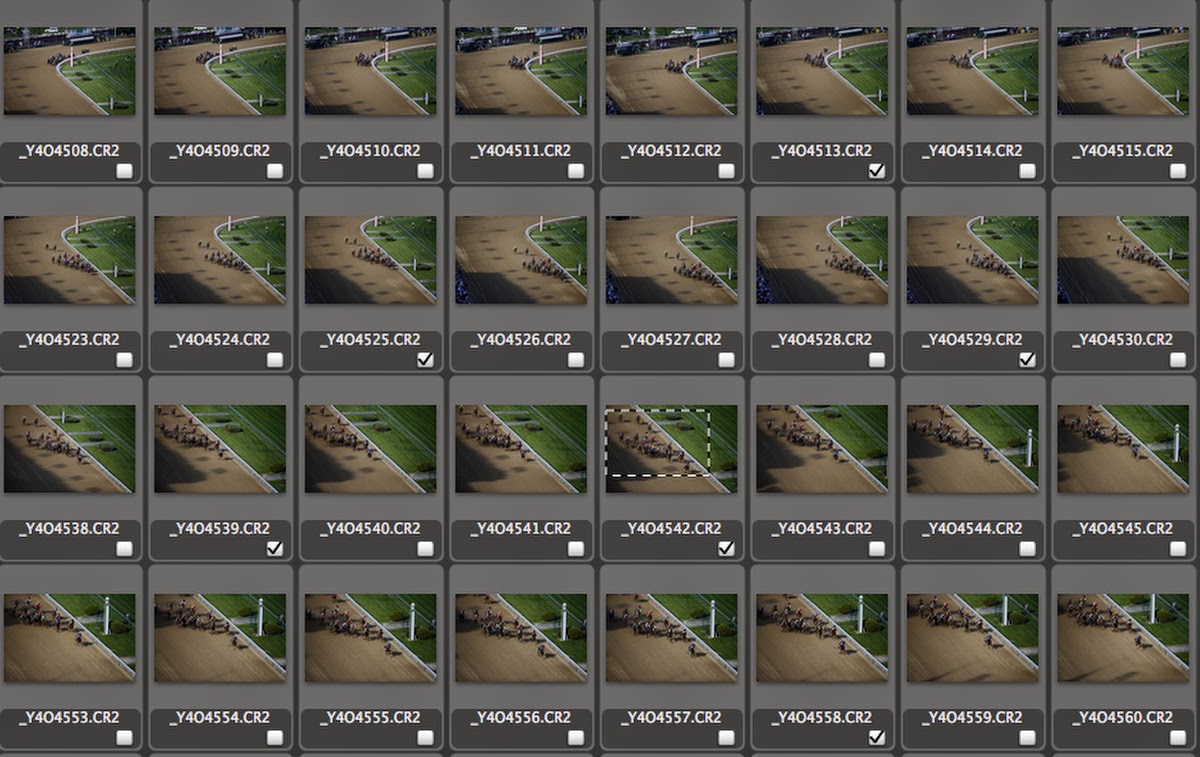 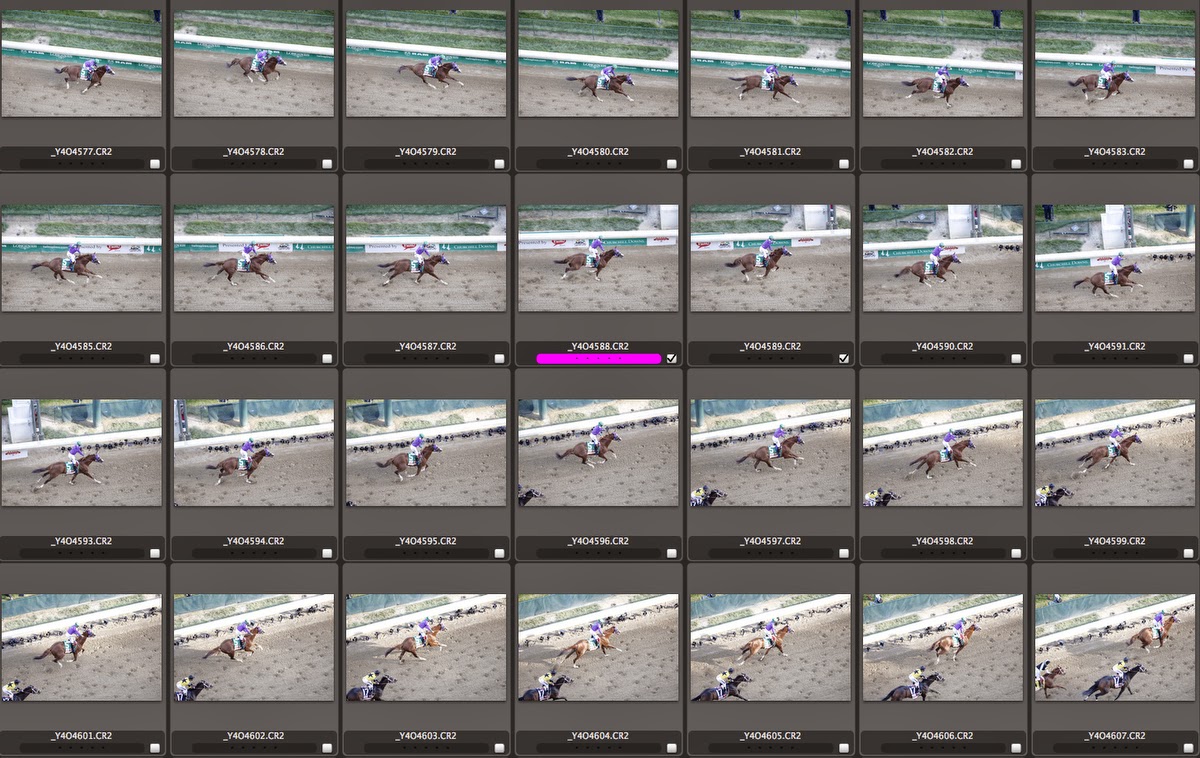 - Once California Chrome rounded the first turn after winning, I threw back on the 1.4x TC to shoot him on his walk back and flipped it back out once he was closer
- I switched cards I was shooting to on my handheld to separate race from post-race
- I flipped the 1.4x TC back in once he was on the turf cooling off and going in to the winners circle and stayed focused on him the entire time until it was over 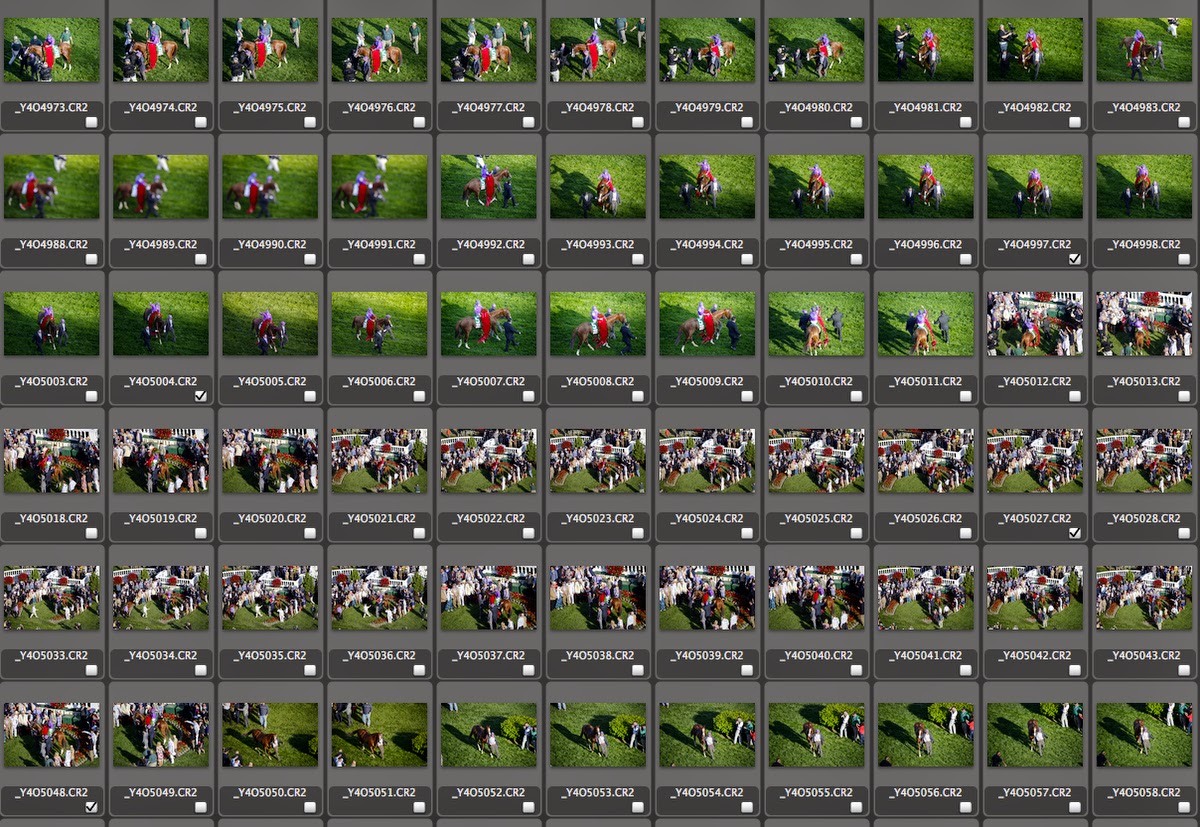 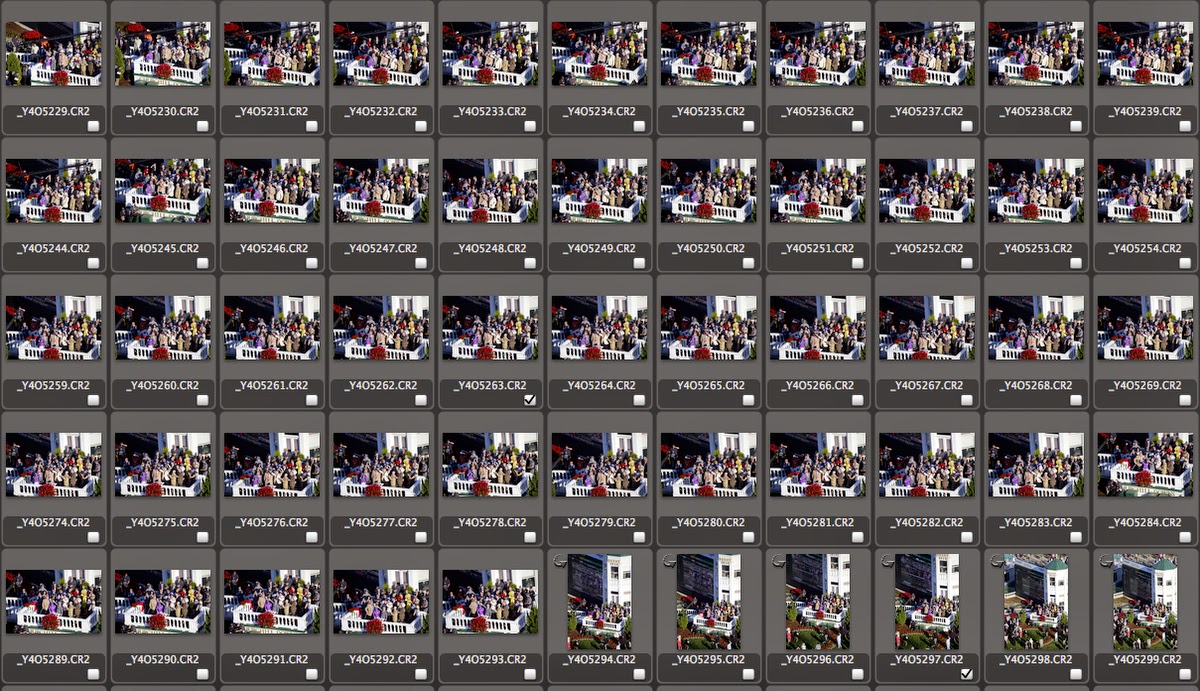 - I quickly took down the remotes and carried them one in each hand, threw the monopod back on the 200-400 and over my shoulder and put on my backpack and headed down to the media room
- I handed 4 cards to Scott Serio for him to edit, breathed for two seconds, packed all my gear up and then helped tear down the other remotes at ground level on the inside of the track


Below are my favorite shots from my entire time in Kentucky.